I’m not very big on sequels, but Disney/Pixar can somehow manage to make them work!

First off, who knew a toys life was so stressful!? If this was a live action film, it would be so intense! The lead being abandoned, KIDNAPPED, and developing Stockholm syndrome. Just when all hope was lost, his friend saves the day and he’s reunited with his family! PHEW! And they are even capable of saving two other lost souls! Crazy right?!

That kind of movie isn’t usually what I’m into, but it’s my daughters favorite of the three, so here we are! My daughter was so happy to be introduced to Jessie the Yodeling Cowgirl! I think she secretly wants to be Jessie so she can always hang out with Buzz Lightyear. Hopefully the new Toy Story Land at Disney World will have more Jessie related merchandise for this crazed fan.

For her birthday, we went all out with the Toy Story theme. Used a blue tablecloth and decorated it with Pixar clouds, had a GIANT Buzz balloon for pictures, and covered her cake with Toy Story Tsum Tsums. One of her gift’s was a Jessie Costume that I got from Amazon and genuine Jessie hat from Kohls. She has worn it nonstop for a year now! She was so excited to wear it to meet Buzz at Disney World last year! It was a magical moment! Buzz waved a heart around her, danced with her, and kept telling her how pretty she was! Best Day EVER! 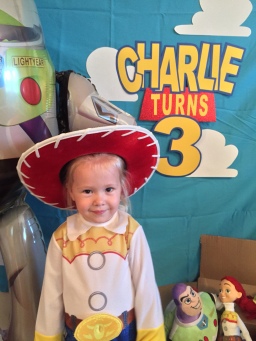 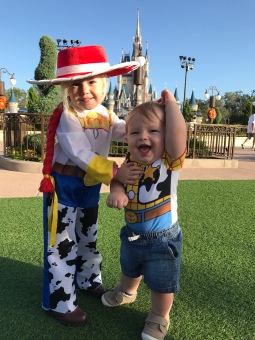 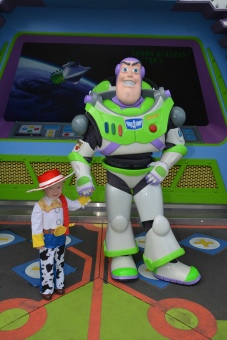 The Triple R Ranch was our inspiration for a rootin’ tootin’ magical movie night! I served Cowboy Chili with cornbread and made Delicious Hot Schmoes for dessert. I also made a Smores Mix that doesn’t require a campfire or broiler. My kids loved both options. It was nice to have the mix to munch on during the movie. Sometimes we munch on cheese doodles, just like in the movie! I found some all natural Cheetos in the organic section. My daughter wasn’t happy that they were a lighter color, but I felt so much better about them eating those than the kind in the movie. 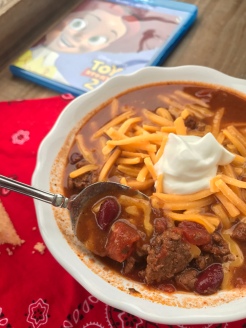 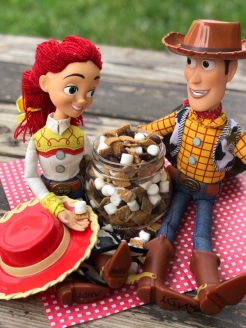 Hope you have a great Toy Story movie night, filled with delicious treats and laughs! I would love to hear who your favorite Toy Story character is and how your movie night went! Tell me in the comments or tag @amagicalkingdomcalledhome on facebook or Instagram.